One of the really interesting aspects of this ongoing project is that our research led to a change in context. Typically design is applied late in the value chain to add the proverbial lipstick to the proverbial pig, but in this scenario we were able to come in at the end and redefine the beginning. To me, this is where design as a discipline really shines and presents an opportunity for real change. The conversation changed from what is the best information architecture for this particular team’s site to what is the best way to get teams interacting with each other using their team sites.

The organization has several department level and team level Microsoft SharePoint sites where working groups keep documentation and files ranging from processes and budgets to embarrassing photos from a team outing in 2004.

These team sites are currently on either the 2007 or 2010 version of SharePoint must be migrated to SharePoint 2013 as we retire old servers and unsupported software. This means the project has a definite end date, but also a good business reason for existing.

Quite simply, the problem is the team sites are a mess. Many departments had discontinued using theirs entirely, and after brushing away the cobwebs, it was easy to see why: no thought had been given to the information architecture and governance and security were haphazard and randomly applied. The sites that are actively used are even worse. Their users survive on shortcuts and tricks, like a hoarder who knows where it is safe to step as they traipse through their mountain of junk. 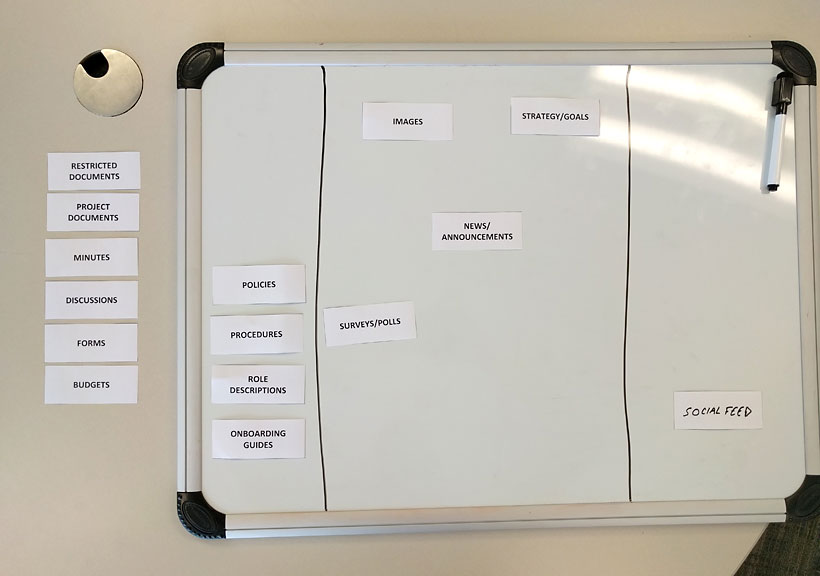 In an early meeting with stakeholders, as I attempted to explain why their digital hoarding led to the complete collapse of many of these team sites, I landed on a mantra for this project: Facebook, not Myspace.

THE CAN OF WORMS

As I extolled the benefits of restricting customization, one of the stakeholders asked me the all-important question, “Why? Why does it matter if Merchandising’s site is like Customer Care’s?” My answer, that if the sites were as structurally similar as the content allowed, anyone could quickly and easily look at and understand another department’s site, was met with another why.

This time, I answered with a question. “What is merchandising working on? What are their goals and major initiatives this quarter?”

It was at this point I realized we were solving the wrong problem. The problem wasn’t that the team sites were badly organized (that is a problem, just not the problem). The real problem is much, much bigger: the organization exists as several walled-off tribes, with little-to-no collaboration or even awareness of what other departments are doing, each fiercely protective of what they “own” to the point that even letting other associates a peek behind the curtain is cause for alarm.

It’s ingrained in the culture. It’s part of the dark matter that constrains this project and puts limits on what we can accomplish and how fast we can make a measurable increase in collaboration.

There was still a looming deadline to migrate the messy team sites and we knew that improving collaboration – a cultural sea change – would not happen overnight, my team decided to split this into two paths: design a team site for a pilot group and create an MVP and roadmap for the future of collaboration using team sites and other tools.